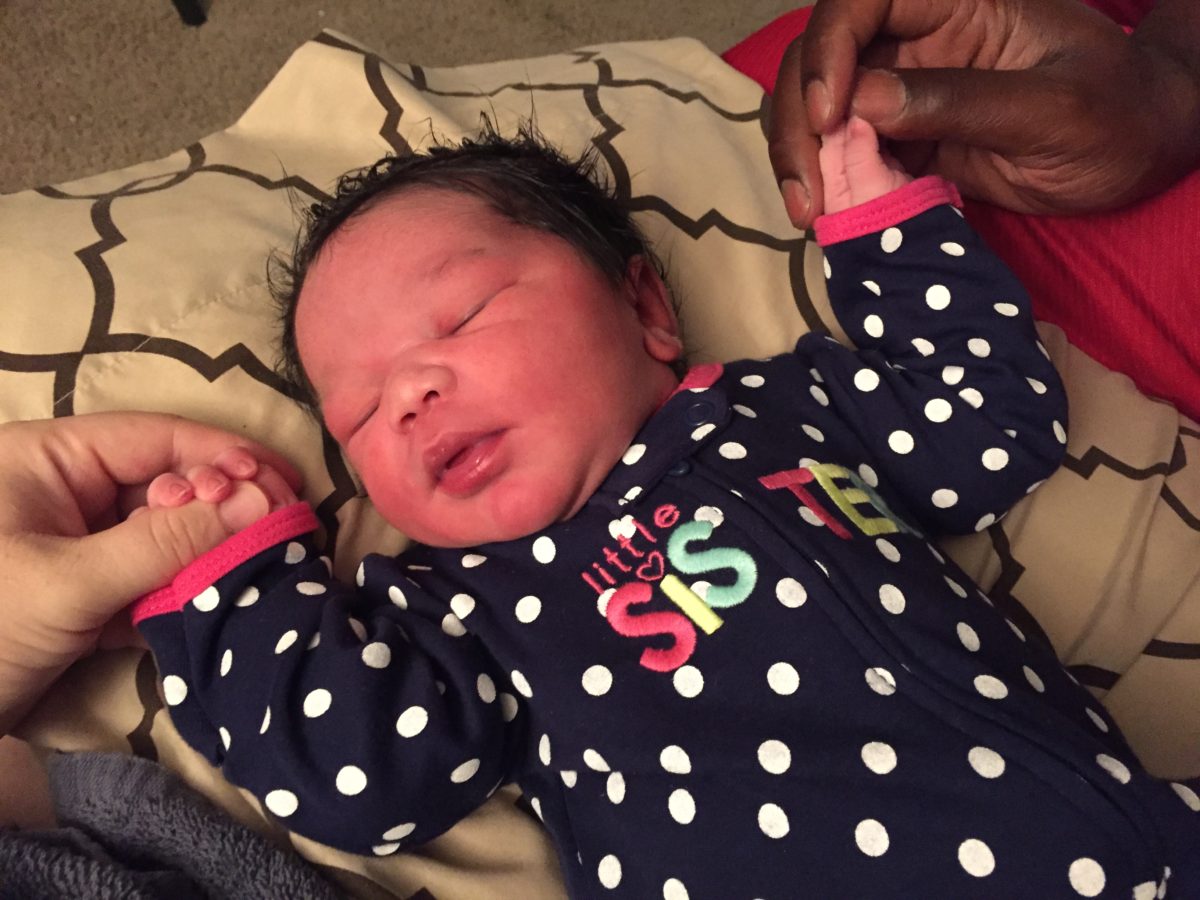 I’ve always known I wanted to do home births.

I was surrounded by them with my mom, extended family, and friends in our homeschool group, so the idea was as natural as breath itself. In 2015, I gave birth to my first daughter at home. The birth itself went quite well, but not quite what I’d hoped (I wasn’t able to have the water birth we had planned).

On Friday the 10th around midnight, I first started to lose my mucous plug. Just a whisper of contractions twinged my abdomen. I knew labor was probably starting, but I’d have quite a while, so I got back in bed. I woke Derick (my husband) and told him I thought labor might be starting.

Saturday was his last day of work before his scheduled leave would begin, and we decided he should call in and stay home in case the labor progressed quickly. He had almost missed the birth of our first baby, arriving home from work just 40 minutes before she debuted, so we weren’t taking any chances this time.

Around 7am Saturday morning I got up, noting a mild contraction here and there. At 7:30, I started timing them and found them to be 20 minutes apart and steady. At 8:30, when I felt I’d gotten a steady enough showing, I updated my midwife on the events of the night and state of contractions. Now, we waited. I worked on a mockup of a logo I was commissioned to design, and finished up a web design project.

Derick and I ate lunch and watched a movie together, me keeping track of the contractions all the while. I couldn’t very well stop myself, since each one would come strong enough to make me tense up and take slow, deep breaths for the minute or so that it lasted. About 3pm the contractions started coming 10 minutes apart, and slowly became a little more intense over the next several hours. We ordered delivery from a local Korean place, since neither of us felt up to cooking dinner.

8pm and the contractions started coming every 5 minutes. The food arrived. I’m probably going to regret this I thought, as I stuffed my face with chicken and rice. It was so good, though. Some of the best delivery food I’ve ever had! At 8:30, I notified my midwife and she headed over, her assistant midwife not far behind.

“Relax your shoulders.” My midwife said, as she saw how tensed up I was getting with each contraction. “Just relax into each one.” I nodded, noting for the first time how much energy I’d been spending trying (and failing) to suppress the pain of each contraction.

Derick put our one and a half year old to bed and set up the birth pool in the middle of the living room. I got in at just about 9pm. The midwives were a bustle of activity, getting all of their supplies prepared and set out for easy access. The water was just slightly less warm than I would have liked it, but I knew we didn’t want it too hot for the baby arriving, so I settled back against the pool wall and stretched out.

Everything calmed down, the midwives chatted quietly as Derick and I both tried to rest a bit before active labor would begin.

Christmas instrumentals played softly and the dim lights made me drowsy; it was quite close to my normal bed time, after all, and I thought we may be waiting for quite a while. Derick dozed on the couch and I attempted some quick bits of shut eye in the few minutes between contractions, though each one was strong enough now to pull me fully back into wakefulness and keep me focused only on keeping my heavy breaths slow until it passed. Relax, relax, relax, I told myself through each contraction. Not such an easy task when every inch of your body naturally wants to tense up.

We did not have to wait as long as I’d thought. Only about an hour after getting into the pool, the contractions took a definite turn to pushing. “I just did a baby push,” I announced, then moved to sit up on my knees and lean against the edge of the pool. Someone grabbed me a towel when I asked, so I could keep my hands and face dry.

The first real push came, and my stomach felt suddenly queasy. “I’m gonna throw up.” I said. The midwife brought a bowl over and when the next contraction hit a few minutes later, I certainly did. After finishing, I chewed a piece of gum and gulped some water as quickly as I could, knowing I’d only have a couple minutes before the next contraction would hit and didn’t want anything in my mouth to throw my concentration off.

Once the nausea passed with that contraction, I settled into the moment, focusing only on powering through the contractions. The cramping in my abdomen was excruciating. I breathed, cried out, rocked in the water (“slow down,” one of the midwives said when my movement started sloshing the water quite too much). Every now and again, Derick would place a hand on my arm and I’d focus on that, the calm reassurance of his warm grip.

My water broke with a small water balloon-like pressure and a muffled pop. The contractions were rolling two in a row, with just a short break between. “Push down,” the midwife said, amidst regular bits of encouragement and guidance. That was the only command that seemed to stick in my mind. Push down. My entire body leaned into it, bearing down till I was spent and shaking.

I can’t do this. I thought, the pain wringing my body.

Then, one more, just one more.

Our baby girl was coming. Soon. My pushes came with a bit of desperation now, my entire being focused only on bringing that baby into my arms. Derick and a midwife got into position to catch her. “Can you see her?” I asked. “Not yet.” They replied. Not yet. All I could do was focus on pushing, pushing with all my might. Make this the last one, I told myself each time.

Then she was at the edge and her head exited. I took a break and deep breaths as the contraction waned for a short minute. The next contraction surged and I bore down, my body relaxing with a wave of relief as her shoulders came out, followed quickly by the rest of her body. 11:15 pm.

I rested my head on the edge of the pool for a minute, then sat slowly back and someone laid the baby on my chest. She was fat and healthy, her face smooshed in a frown.

I wish I had a photo of just that moment; her weight on my chest, her soft and squishy skin covered in vernix, her eyes shut tight; not yet ready to leave behind her previous world of warmth and darkness.

I sat back and rubbed her back, stroked her hair. My baby.

The rest of the night was a peaceful and steady flow of getting everything cleaned and finished up. I don’t think I’ve ever felt more lovingly pampered than those few hours where my husband and midwives so joyously set the house completely back in order while I showered and sat on the couch cuddling our baby.