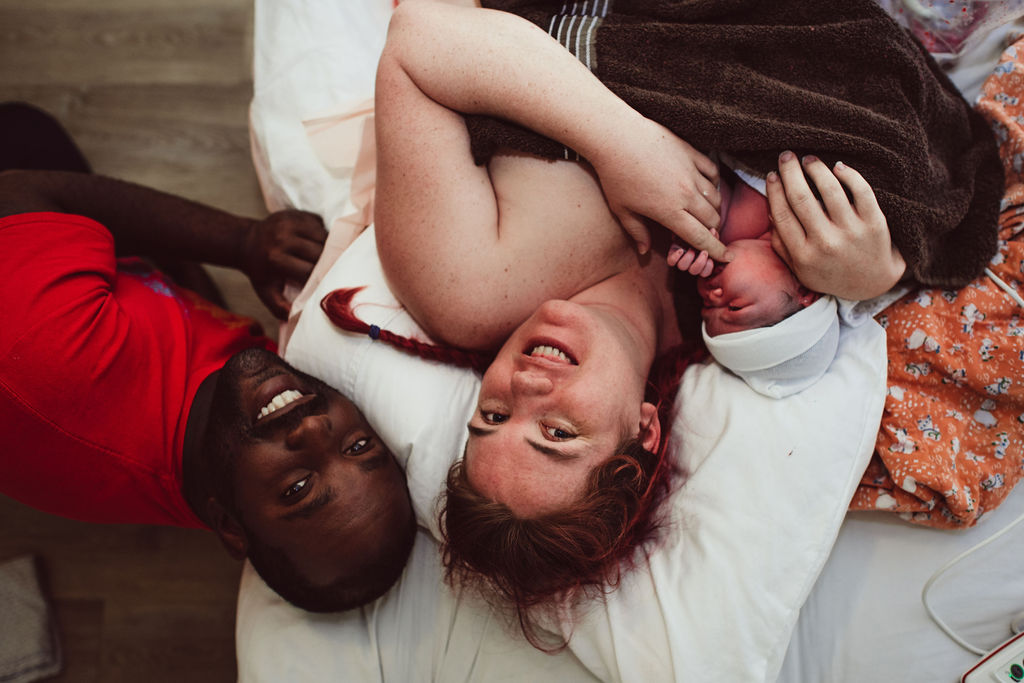 I lost my mucous plug with some bloody show around 5am Monday morning, at 39 weeks. This always signifies the beginning of labor for me, and generally means the baby will be born almost exactly 24 hours later. I tend to have a slow start for the first 20ish hours, then in the last 3-4, labor picks up and goes really quickly. I was ready! I let my midwife know where we were at and called my mom so she could drive up.

Through the day, labor progressed normally, contractions slowly and steadily getting stronger and closer together. We prepared the room, ate dinner, put the kids to bed, and waited. Around 10pm, my contractions were coming 5 minutes apart and that meant we were really close to active labor starting. My birth team (Jude – Midwife, Meg – Assistant, Nicole – Photographer) arrived about 10:30 and I got into the birth pool. 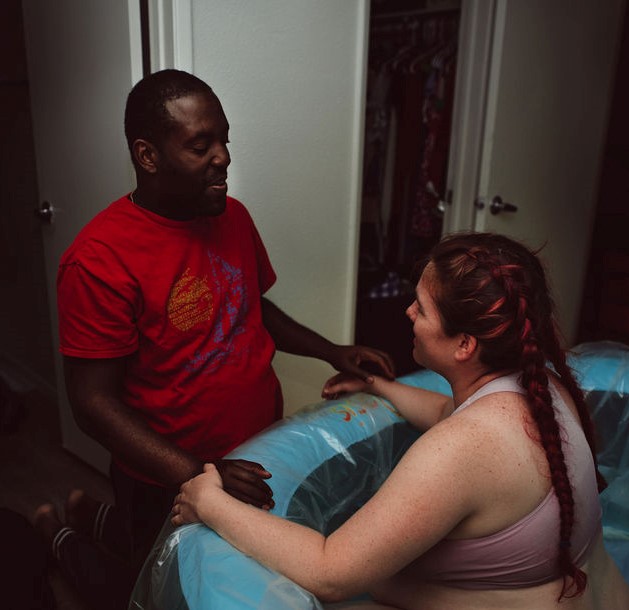 Contractions were still coming, though didn’t seem to be increasing in intensity or time. I didn’t really realize it at the time, but they had actually decreased some.I labored in the pool for about 2 hours, though to me it felt more like 30 minutes. 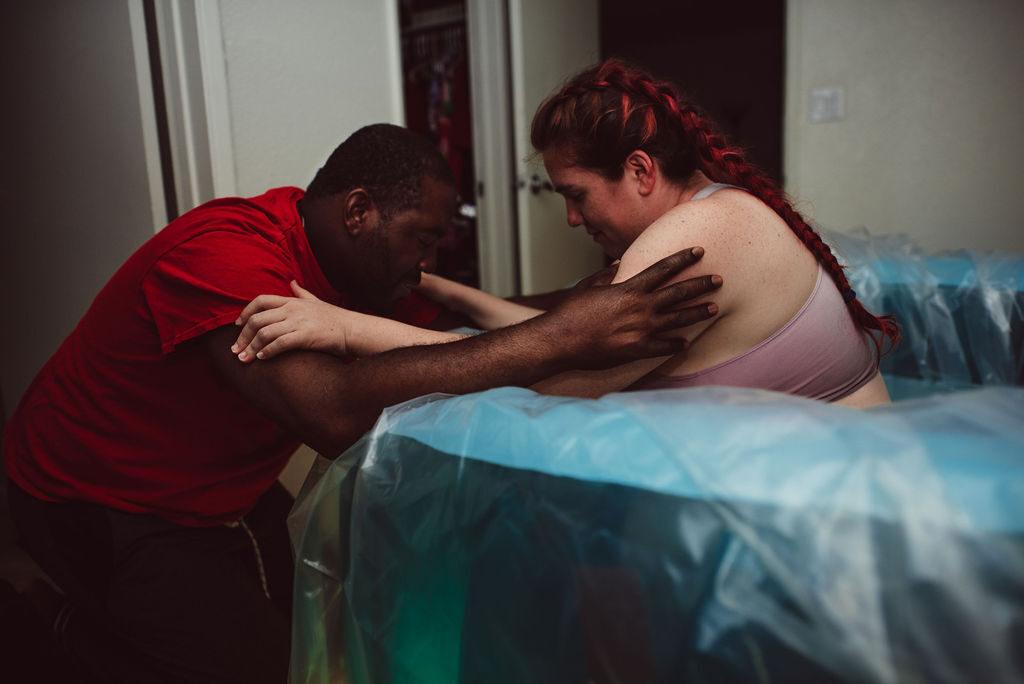 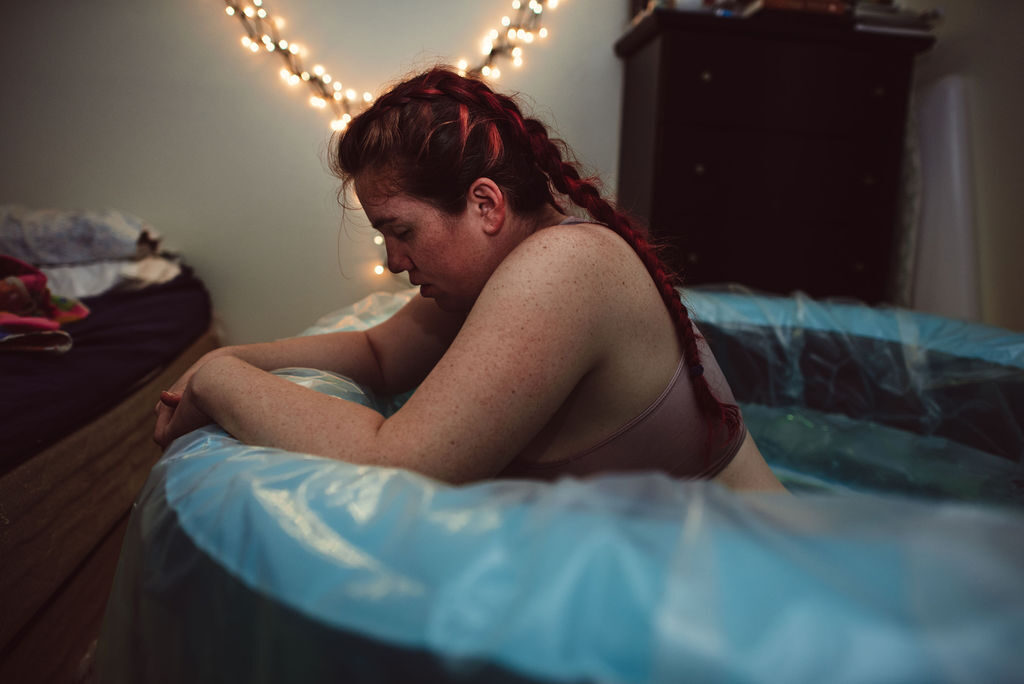 Jude checked my cervical progression to decide if we should all just try to get some rest for the night. She decided to stay a couple more hours based on my dilation, but around 3am it seemed everything had sort of stalled out, so I went to bed and Jude and Meg went home (just a 10 minute drive), while my mom and Nicole camped out on the couch. I felt really bad about that, even moreso because this was my fourth birth and “should” have been like clockwork! 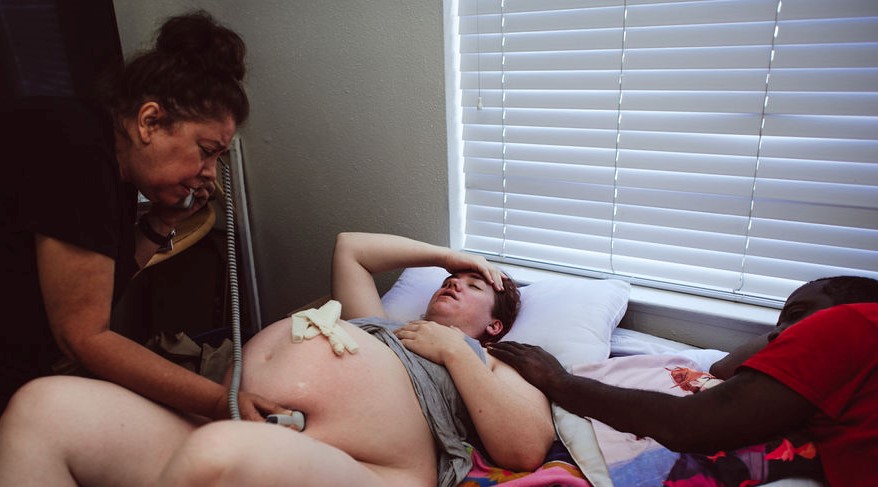 I didn’t get much rest. All night, the contractions continued, getting stronger and closer together again. I sat up a few times to try and track the time, but couldn’t keep my brain active enough. 5am passed. The 24 hour mark. Did that matter to me? This baby was determined to be different from her siblings.

Around 6am, I counted them at about 3 minutes apart, so I called Jude again and she prepared to come back. I mentioned the idea of manually breaking my water, since we knew I had a lot of fluid and I thought maybe that was keeping the baby’s head from being able to fully engage.

She was hesitant to perform any interventions, as there are always potential risks involved, but it was something we’d consider. She arrived back at my home around 7:30am and we spent about 2 hours doing various actions to try and get the baby to drop down into position. Side lunges, a makeshift rebozo, lying on my side.

None of this had any significant impact on the baby’s position. 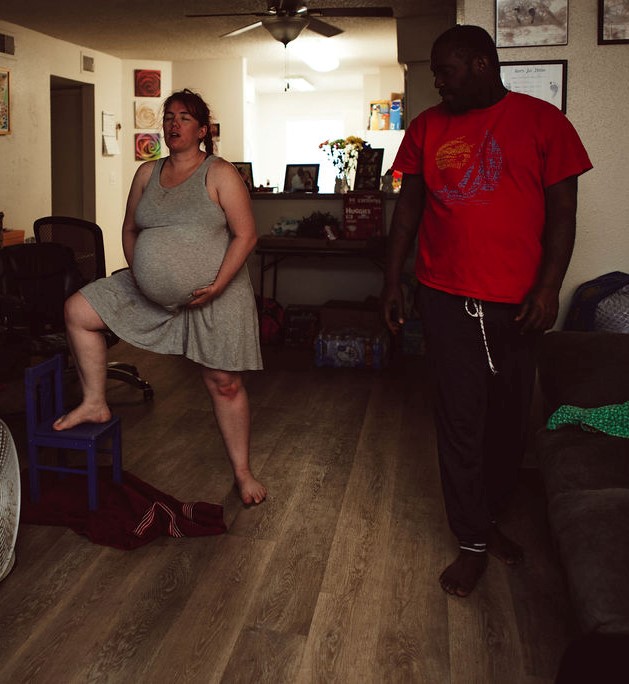 She was still bobbing around and her head wasn’t engaged so at 9:23am Jude manually broke my water, flooding the bed. For the next hour, I moved all around the room – sitting, standing, hands and knees, squatting. Contractions were still relatively mild, still roughly 5 minutes apart.

About an hour later, we started loosely talking about the possibility of transferring to the hospital, since we really couldn’t figure why the labor didn’t seem to be progressing normally. Mine and the baby’s vitals were always great. 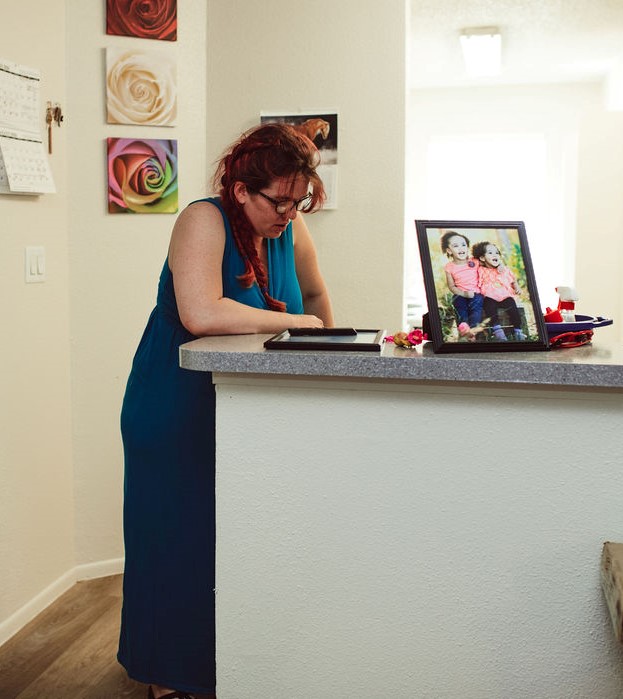 My husband and I went for a short walk around the building and came back to find the room cleaned and bed made. Jude asked me what I thought about trying an herbal tincture to help increase the contractions and see if that would push labor into action. I said I’d be willing to try it, and we decided that we’d do that for about an hour. Then, if there were no changes, we would need to transfer.

I took some of the herbs and started using a breast pump to help increase contractions. They hit much stronger almost immediately, making me throw up. Pretty quickly, they were coming around 2-3 minutes apart, lasting for about 60 seconds. Jude and Meg were tracking really closely. We were on a transfer timeline now.

I started out sitting on the bed to use the breast pump, then squatting on the floor during each contraction. Every other time I pumped, I’d stand. I did some ‘practice’ pushes to see if I could get it really going, but they didn’t really seem to do much. Meg noticed a cervical lip while checking for the baby’s position, likely aggravated by the forced pushing I had been doing. They set up some pillows on the bed so I could rest a bit and not make the cervical lip more swollen. I laid belly-down on the pillows, still tracking contractions all the while. 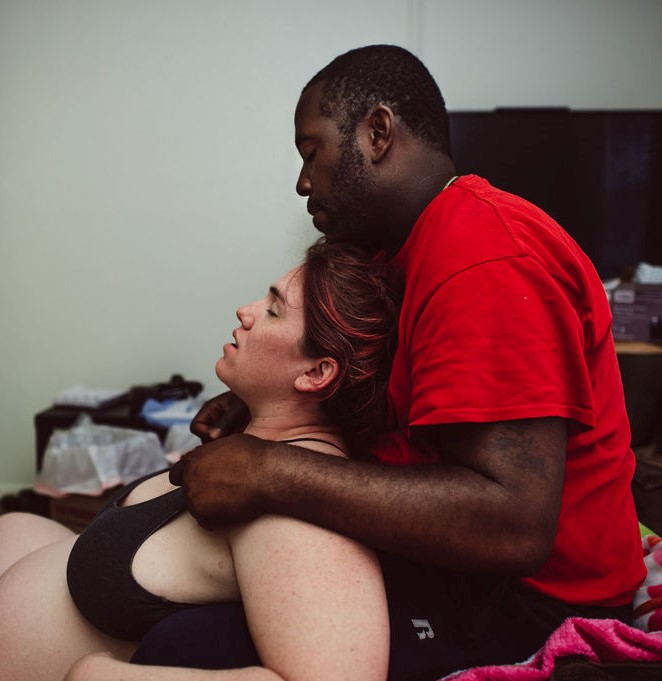 I was tired. I imagined going to sleep in between each contraction – the only time I had to rest. Never before during labor had I even thought about the hospital, but now I desperately just wanted a c-section. Just cut this baby out of me! I kept thinking. It felt like she’d never be born. I wouldn’t be able to do it.

Eventually, Jude asked to check the baby’s position again. I knew this was it. Either the baby was engaged in a good position or we were going to transfer. I was prepared for the transfer, wanted it, even, if only to be done.

I rolled onto my back and she checked the baby’s position. The baby had moved a little further down, but her head was still kind of ‘bouncy’ as Jude put it.

“I can move the lip,” Jude said. “I might be able to hold it out of the way and we can see if we can get the baby past your cervix. Hold your legs up, with your knees up by your ears, as high as you can get them.” She said to me.

“I can’t… it’s too painful.” I think I said, but maybe I just thought it. I attempted to pull my legs up, but it was excruciating. Someone helped me, I don’t know who. My eyes were open but I wasn’t really seeing anything. I gripped my legs behind the knees and my midwife said, “Okay Joanna, I want you to push as hard as you can.”

I took a breath and halfheartedly pushed, but it was too painful. The contractions were still coming, but none were telling me to push. They just hurt.

“She’s coming, we’re going to have your baby!”

“Come on, you can do it. Take a deep breath and hold it, then push.” Someone said. Maybe Jude, or Meg. My husband was on the bed next to me, but I don’t know if he said anything.

I took a breath, held it, and pushed. Every ounce of strength was directed there, making me shake with its power. The baby’s head moved past my cervix and I let my breath out with a whoosh.

“She’s coming, we’re going to have your baby!” Jude said to me. I was already pushing again.

“Chin down. Take small breaths in.” Someone instructed. I gasped a small breath and held it. I dropped my chin to my chest and pushed again. It hurt, more than anything in my life has hurt. Then her head was out.

“Get her on her hands and knees,” the midwife said, giving more commands I didn’t really comprehend as I rolled to my hands and knees. “Get oxygen ready.” I heard. Is she not breathing? The thought crossed my mind and was gone. 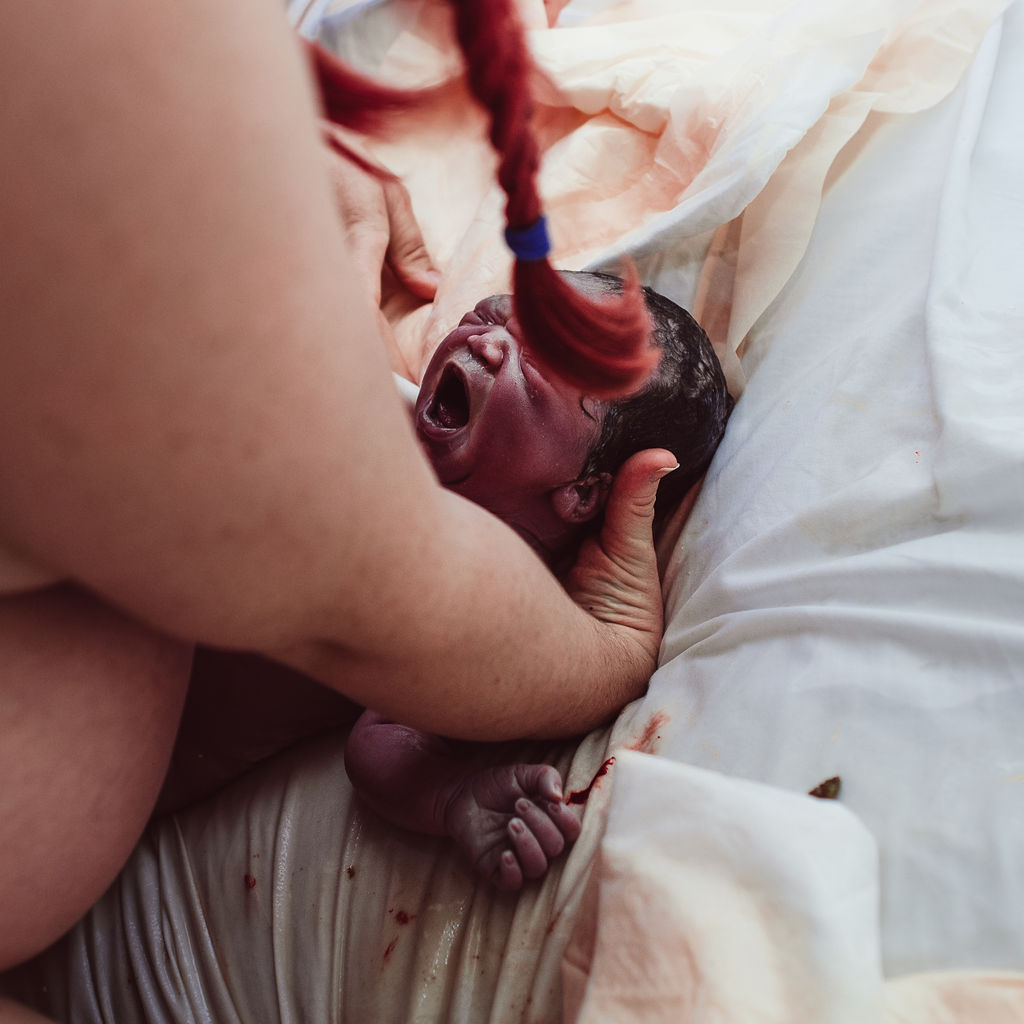 “Do I need to push again?” I asked. I think I asked, nobody answered right away. During all of my other births, once the head was out, the rest of the body quickly followed, but this baby wasn’t moving. Someone must have told me to start pushing, because then I was pushing again. One, maybe two big pushes, then she was unstuck and slipped out.

I fell forward on the bed. Exhausted. Done. Everything was sore and my baby was born. I heard her let out a wail. She’s breathing!

Somehow, I found myself laying down on my back and the baby was laid on my belly. 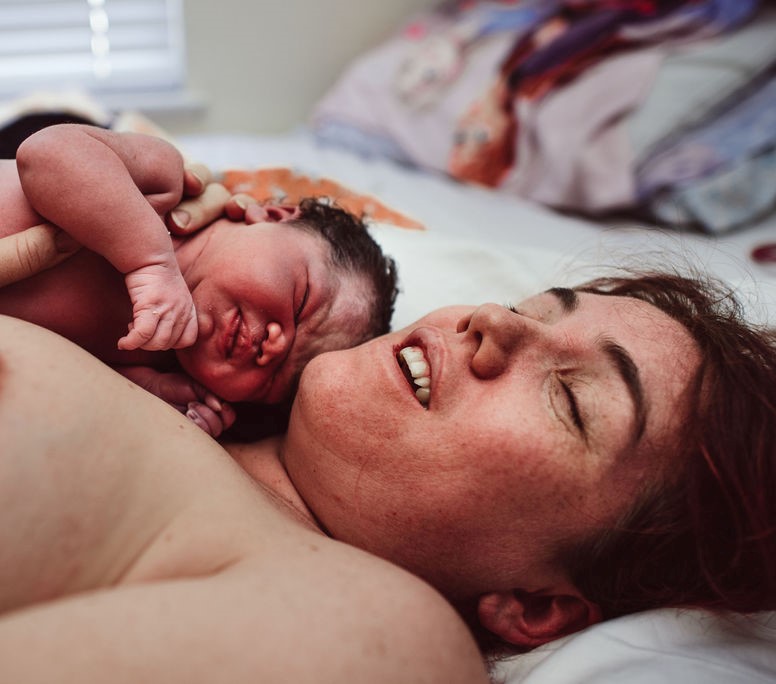 “Short cord.” The midwife noted to the assistant. It felt like the baby was barely able to lay up to my belly button. A cuff was put on the baby’s hand to check her oxygen, which ended up being perfectly fine. After a few more minutes, I pushed the placenta out and was able to pull my baby up to my chest. I rolled to my side and she latched on to nurse immediately.

The next few hours were a bustle around me as the baby’s cord was cut and vitals checked, the bed was cleaned, eventually I took a shower. Most of that time I spent looking at my newest little love, and wondering how in the world did I just do that?? 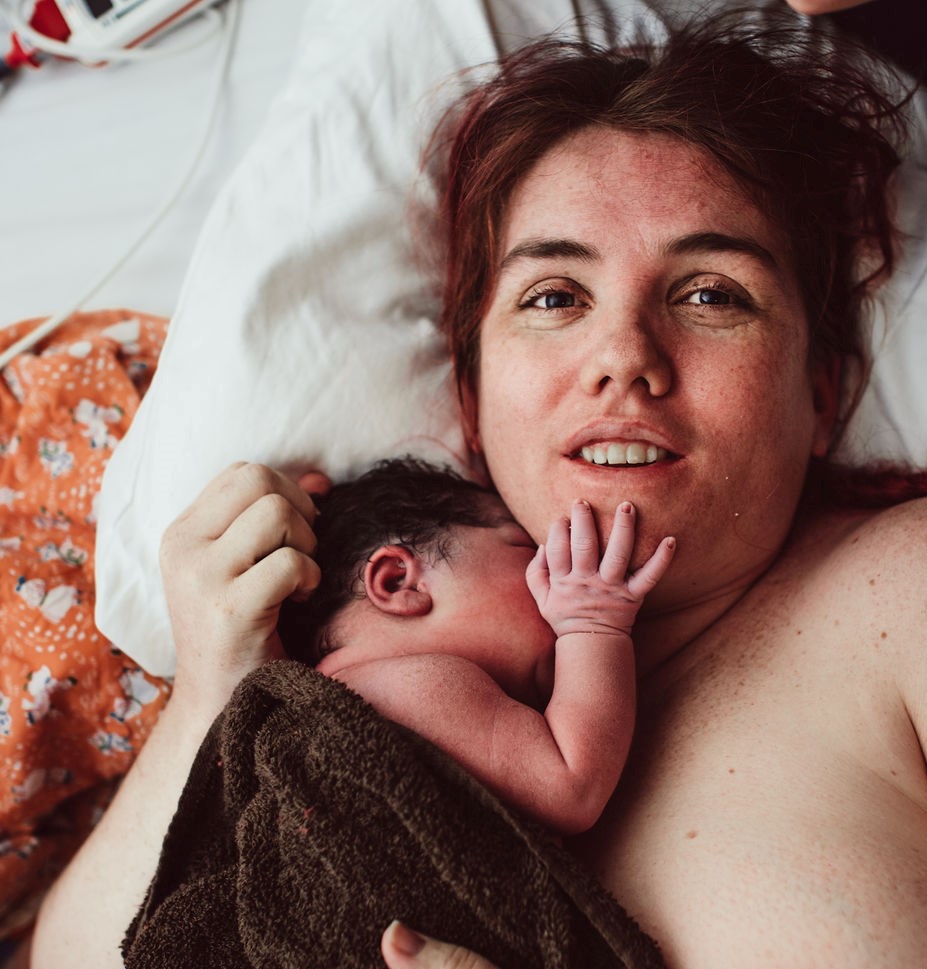 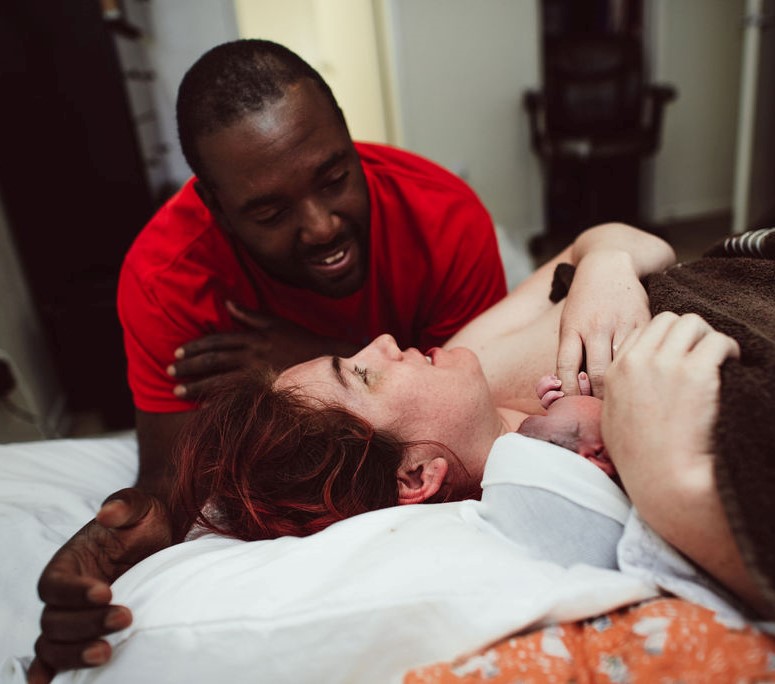